Larry Simons Sculpture and Assemblages opens Saturday May 4 ( 9 am-1 pm) and runs through the month in our gallery. 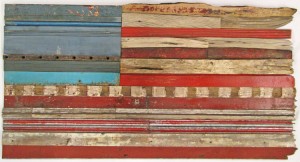 Larry Simons, who lives in a house he designed and built himself on forty-two acres near Brattleboro, Vermont, specializes in assemblages of found wood and metal objects. The wood Simons uses is both natural, such as driftwood, or pre-rendered from its previous life as part of a building, tool, piece of furniture, or other consumer object.

He created his first sculptures in 1965, from the leather scraps from a sandal shop where he worked on Cape Cod. In his work since, he describes himself as a “recycler by nature,” saying, “virtually everything I use in my art has had a previous life – bobbins, chair spindles, tool handles, toys, croquet sets and wooden patterns from steel mills,” for example.

Moved by weathered buildings, Simons’ work takes on the rusticity he loves, and the compositions, whether symmetrical or irregular, showcase the lines of objects evocative of the past. The metal that appears in his pieces is frequently rusted, as he appreciates the hue of rust in conjunction with that of wood, and it serves further to endow his objects with a sense of age. He prefers to work with the colors of objects he finds, rather than repainting or recoloring anything, so his creation of an assemblage such as the flag, at left, require tracking down pieces of the necessary red, white, or blue. Much of Simons’ work, like the flag, lines up or stripes the different pieces of wood, creating a tension between the rigidity of the vertical or the horizontal, and the irregularity of the found objects.